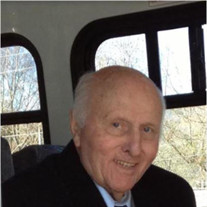 Dr. Charles Guy Graves, Jr. died quietly at his home in Dunlap Tennessee on July 20, 2021. His beloved wife of 66 years, Mary Lou Ekvall Graves preceded him in death on October 31, 2017. He is survived by his 4 children and their spouses; Dr. Charles Graves III & Denise, Louella Freeman & Tim, Nancy Billington & Brad, Dr. George Graves & Melanie as well as 9 grandchildren & 10 great-grandchildren and his twin sister, Louella Schiefer. Charles Graves was born June 4, 1925 to Charles and Lottie Graves in his grandparents' farmhouse near Siler City, North Carolina. Memphis Tennessee was home but Charles & his twin sister created summer memories on their grandparents' farm with little Charles tagging along after his grandpa. Growing up during the Depression, Charles treasured ballgame outings with his dad & later loved playing softball games with his kids. Charles graduated from high school planning to become an engineer like his father, but World War II changed his destiny. At 18, Charles was drafted, went through basic training and served as an Army medic in field hospitals with the 7th Army from 1944 to 1946 in Germany and France. Watching Army physicians perform surgeries, bringing hope and healing to the wounded, inspired Charles to alter his career plans and become a medical doctor. After the war with the help of the GI bill, Charles pursued per-med graduating in 1949. He chose Loma Linda University School of Medicine in California and began his medical training. At LLU, Charles saw a beautiful young nursing student, Mary Lou Ekvall playing a lively game of volleyball. He worked up his nerve & asked Mary Lou out on a date. Their romance blossomed and they were married June 11, 1951. After 2 years on the Loma Linda campus, Charles spent 2 years at the White Memorial & the Los Angles' County Hospital where he saw "everything imaginable." After graduating in 1953, he also interned at the LA County Hospital. During this time, Charles & Mary Lou had two children, Charles III & Louella. Although Dr. Graves was offered a lucrative practice in California, Charles' dream was to return to his home state of Tennessee and serve the medical needs in a small town. So, Charles and Mary Lou chose Dunlap, in the beautiful Sequatchie Valley & joined a small medical practice with an existing 10-bed hospital, surgery suite, emergency room and outpatient clinic. Dr. Graves practiced medicine for 50 years, treating out-patients, admitting in-patients, dealing with emergency room crises, delivering babies & performing countless surgeries. Charles and Mary Lou teamed together to expand the Sequatchie General Hospital to a 49-bed facility serving Dunlap and nearby communities. They also helped build the Dunlap Seventh-Day Adventist Church and later a church school. Dr. Graves always said, "You can never out give the Lord!" He worked with other businessmen to create Citizen's Tri-County Bank in Dunlap, which now has locations in multiple towns. When Dr. Graves retired in June, 2003 he and Mary Lou renovated the old Sequatchie County Bank building in downtown Dunlap & he supported his wife as she launched Mary Lou's Luncheonette serving delicious meals for many years. Possibly one of Dr. Graves' biggest legacies came from conquering his fear of water. Because Charles didn't learn how to swim when he was young, he always felt anxious in the water. He challenged himself and learned to water ski, snorkel & even scuba dive, but he didn't want his kids to have his fear of water. So, when a traveling pool company came to Dunlap, he took a chance & had them install a home pool where his children learned to swim fearlessly! But Charles went further, supporting Mary Lou's creative VBS idea to offer free swimming lessons at their home pool to community children. Each summer, 100+ kids learned to swim under Mary Lou's enthusiastic leadership for over 40 years. Thank you Dr. Graves, for impacting so many lives for good. Your family & friends look forward to seeing you again soon when Jesus comes to take us home! Graveside services will be held Thursday, July 22, 2021 at 2:00 PM in Sequatchie Co. Memorial Gardens with full military honors provided by Sequatchie Valley Honor Guard. Visitation will be from 11:00 AM - 2:00 PM at Ewton Funeral Home & Cremation Center. A memorial service will be held at a later date.

Dr. Charles Guy Graves, Jr. died quietly at his home in Dunlap Tennessee on July 20, 2021. His beloved wife of 66 years, Mary Lou Ekvall Graves preceded him in death on October 31, 2017. He is survived by his 4 children and their spouses; Dr.... View Obituary & Service Information

The family of Dr. Charles Guy Graves Jr. created this Life Tributes page to make it easy to share your memories.

Send flowers to the Graves family.