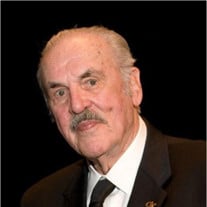 Harold Mitchell "Jack" Reynolds of Dunlap, TN passed away on October 15, 2021 after reaching the age of 96 years old. He passed peacefully in his sleep Friday morning, with the loss felt by many. Jack was born October 4, 1925 in Chattanooga TN. All his life he was the epitome of a hard worker. Dropping out of school at the age of 15, after 6 weeks of high school, in order to join the workforce to help provide for his siblings. Jack used his maturity and stature to secure a job with the electric power board, despite being underage. His strong work ethic and drive quickly secured him a promotion moving him up to the test bench. Jack joined the U.S. Navy in April 1942, and worked up in rank while serving in World War II. Upon Jack's return to civilian life, he decided to study television repair. Showing promise with his work with electronics a friend suggested that he pursue a degree in electrical engineering. Jack applied to Georgia Tech. The Dean was unsure about giving Jack a chance, considering Jack's high school transcript was 6 weeks of four F's and an A. Taking a chance, the GA Tech Dean had Jack take a placement exam, revealing Jack's intelligence and aptitude reflected that of a third-year college student. Based on his test results Jack enrolled at GA Tech, and graduated three years later with a degree in electrical engineering. Upon Jack's graduation, he returned to the Chattanooga Electrical Board. He then went on to do consulting work for industrial plants in Chattanooga. In the following years, Jack owned and operated a dairy farm, went into the trucking business, was an airplane-owning pilot, worked in real estate development, began a strip mine business, and subsequently retired to his farm where he raised beef cattle. In 2011, Jack was inducted into the Georgia Tech Engineering Alumni Hall of Fame, a recognition he was exceptionally proud of. Jack was the strong patriarch of his family, a good friend, and a wealth of wisdom. Throughout his entrepreneurial life, Jack employed many people throughout the Chattanooga valley, impacting many with the jobs he was able to provide. He was always willing to share his wisdom and guide those who would listen on a path to success. His influence and love has been felt by many. He is survived by a host of children, grandchildren, and great-grandchildren who will greatly miss his presence in their lives. No public services will be held. The family requests that in lieu of flowers please make donations to the U.S. Department of Veterans Affairs. Arrangements by Ewton Funeral Home & Cremation Center.

Harold Mitchell "Jack" Reynolds of Dunlap, TN passed away on October 15, 2021 after reaching the age of 96 years old. He passed peacefully in his sleep Friday morning, with the loss felt by many. Jack was born October 4, 1925 in Chattanooga... View Obituary & Service Information

The family of Harold Mitchell "Jack" Reynolds created this Life Tributes page to make it easy to share your memories.

Harold Mitchell &quot;Jack&quot; Reynolds of Dunlap, TN passed away on...

Send flowers to the Reynolds family.