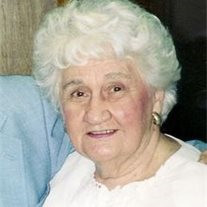 Mildred Shaver Raines, 89, of Chattanooga, died Wednesday, December 18, 2013. A native of Dayton, TN, she was born to Dima Sparks and John Hudson Shaver, July 25, 1924 in Dayton, TN. She was preceded in death by her husband of 62 years, William Basil Raines, Sr. and her sister Kathrine Shaver Pegues and brother Olin Shaver. She was secretary of White Oak Elementary School for 25 years. She was loved and liked by teachers, students and parents. The Parent Teachers Association presented her with a Life Time Membership into the Tennessee Congress of Parents and Teachers. She was an avid gardener and had an acclaimed "green thumb." With her husband, they enjoyed living in Pensacola, FL for a number of years but in later years returned to TN to be near family. At their "get away" cabin, they celebrated life and fellowship with family and friends at Wolftever Fishing Club for many years. She is survived by her two sons and daughter-in-laws, William (Bill) Raines, Jr. and Jerrie Jonakin Raines, DDS; and John Robert (Bob) Raines and Jan Fort Raines. Six grandchildren; Dr. Jean E. (Raines) Lessly of Nashville, Rev. Philip A. Raines of Winston-Salem, NC, John William Raines of London, England, Will Jonakin Raines (17) of Chattanooga, Jason Raines of Washington State and Robin (Raines) Medeiros of Signal Mountain and seven great-grandchildren; Sabrina and Julia Lessly of Nashville, Toby, Tabitha and Thad Raines of Washington State and Juliana and Alyssa Medeiros of Signal Mountain. She was a member of Red Bank UMC and a member of her cousin Joe Guthrie's Sunday School Class. A memorial service will be held on Saturday, January 11, 2014 at 2 PM EST at Red Bank UMC with grandson Reverend Philip Raines officiating as well as Rev Jeff Lambert. Private burial will be at Rankin Cemetery, Dunlap, TN. In lieu of flowers, donations may be sent to: Hospice of Chattanooga, 4411 Oakwood Dr., Chattanooga, TN 37416.

Mildred Shaver Raines, 89, of Chattanooga, died Wednesday, December 18, 2013. A native of Dayton, TN, she was born to Dima Sparks and John Hudson Shaver, July 25, 1924 in Dayton, TN. She was preceded in death by her husband of 62 years, William... View Obituary & Service Information

The family of Ms. Mildred Shaver Raines created this Life Tributes page to make it easy to share your memories.

Send flowers to the Raines family.