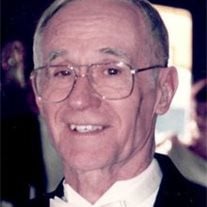 Thomas Luther Haman, of Dunlap, TN, passed away January 1, 2015. Master storyteller, loving father, World War II veteran, and driving school pioneer Thomas L. Haman passed away Thursday after 95 adventure-packed years. He taught himself to drive at a young age in Pittsboro, MS, in one of the only cars in town. He hitchhiked his way across the south, beginning college at King College in Bristol, TN, before World War II. He then enlisted in the U. S. Army Air Corps, serving in India, helping cargo planes cross the Hump throughout World War II. He returned to east Tennessee, where he finished a teaching program at East Tennessee State University before settling with his young family in Chattanooga. He briefly taught Industrial Arts at Chattanooga City High School before opening Haman Driving School in 1953. Thousands of Chattanoogans learned to drive behind the wheel of a Haman Driving School car. Haman himself spent more than 50 years teaching people to drive, including those with severe disabilities. Along the way, he honed his storytelling skills, entertaining friends and family with tales of his rural Mississippi antics, the war, and his days in the front seat with student drivers. He retired in his 80's after building his own house on a farm in the Sequatchie Valley, where he taught himself to drive a tractor and became a championship Rook player. He was an active member of Chapel Hill United Methodist Church. He will be sorely missed by his wife, June (Ewton) Haman, sister Billie Massey, children Douglas B. Haman (Charlene), Robert B. Haman (Lois), Paul S. Haman (Shirley), Frances N. Haman-Prewitt (Mike), Steven L. Haman (Janet), Jeannie D. Haman (Jason), and Curtis L. Haman (Michelle), 19 grandchildren and 11 great-grandchildren. He was predeceased by siblings Martha A. Kay, Paul B. Haman, Roye Mandt, and son Thomas Walton Haman. Funeral services will be held at 1:00PM CST Monday, January 5, 2015 in the funeral home chapel with Bro. Tom Tucker officiating. Burial will follow in Chapel Hill Cemetery with full military honors provided by the Sequatchie Valley Honor Guard. The family will receive friends from 2-8PM CST Sunday.

The family of Mr. Thomas Luther Haman created this Life Tributes page to make it easy to share your memories.

Send flowers to the Haman family.