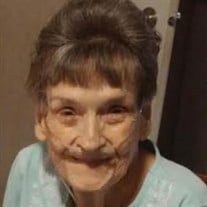 In loving memory, we say goodbye to Wanda Gayle Boston Littrell who passed away May 17, 2020 at the age of 75. She was preceded in death by her parents, Virgil and Mamie Owensby Boston; husband, Dennis Eugene Littrell; daughter, Brenda Littrell... View Obituary & Service Information

The family of Wanda Gayle Boston Littrell created this Life Tributes page to make it easy to share your memories.

Send flowers to the Littrell family.