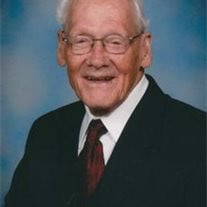 Horace Wayne Reynolds 89 , of Dunlap, passed away December 27, 2016. Mr. Reynolds was born January 8, 1927 to the late Horace Edgar and Vera Cordell Reynolds. He was also preceded by a sister, Norma Murphy, 2 brothers-in-law, Earl Murphy and Alvin Shaver. He is survived by his wife of 71 years, Martha Lou Hamilton Reynolds, sister, JoAnn Shaver , Pikeville, several nieces and nephews. Along with his parents, he owned and operated Dunlap Building & Supply for fifty years. He served two years in the Navy Air Corps during WW II. He was a member (67 years) and Chairman of Trustees of Dunlap United Methodist Church. He had been a member of Dunlap Lions Club since 1947 and served as Secretary-Treasure twenty five years, Chairman of Lions Club Christmas Baskets for fourteen years, and has received the Melvin Jones Award. He was Boy Scout Master four years, member of Dunlap Lodge F&AM 693 since 1948, Cherokee Chapter Eastern Star since 1949, and Worthy Patron for thirty years. He designed and helped build the Sequatchie County Rescue Squad where he was a member for twenty seven years. He was Co-Chairman of the O.K. Hege Horse Show twenty two years and announcer for thirty years. He was Co-Chairman of the Red Cross Blood Drive, member of the Regional Health Council, Chairman of the Board of Directors at Dunlap Industries, Co-Chairman of March of Dimes twenty six years, Director of the Sequatchie Valley Electric Cooperative, Director of the Dunlap Chamber of Commerce, and member of the 911 organization Committee. He went to Washington, D.C. where he received the Jefferson Award for the Chattanooga area. He Co-Chaired construction and re-construction of the Griffith Elementary School play ground. He was a member of Dunlap Quarterback Club since 1954 serving as secretary-treasure for twenty years and was the announcer at all football games for forty nine years. He was Co-Chairman of the Athletic Committee Building and supervised the construction of the Football Complex. He was inducted into the East Tennessee Football Hall of Fame in 1988, inducted in T.S.S.A.A. Hall of Fame in 2001, and was East Tennessee T.S.S.A.A. Contributor of the year in 2002. Funeral Services will be held at 11:00 AM CDT, Friday, December 30, 2016 in Ewton Funeral Home Chapel with Bro. Benny Matherly officiating. Masonic services will be accorded at the funeral home. Burial will follow in Chapel Hill Cemetery. The family will receive friends from 4:00-8:00 PM CDT, Thursday, December 29, 2016. In lieu of flowers, please make contributions to Dunlap United Methodist Church or Sequatchie County Cancer Support Network.

The family of Wayne Reynolds created this Life Tributes page to make it easy to share your memories.

Send flowers to the Reynolds family.